Android 10-based EMUI 10 open beta update is rolling out for the registered users in India. The update is rolling out in batches and brings all the EMUI 10 features. Huawei says that this Huawei P30 Pro beta testing program is opened as a part of its Diwali #spreadthejoy campaign. Also, the company says that all the users will receive the EMUI 10 beta update by this week. 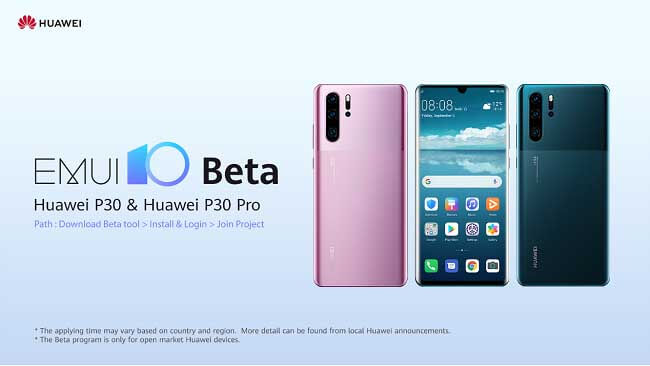 Huawei P30 and P30 Pro were under the first batch to get the Android 10 beta update. Moreover, the Chinese smartphone giant also started recruiting for EMUI 10 update for the second batch of devices. This includes the Huawei Mate 20 series, Honor 20 series, Honor View 20, and more. The stable update will be happening in November for the first batch of Huawei devices followed by the second batch in December this year. You can check the complete list of Huawei phones that will get the EMUI 10 here.

In case if you’re unaware, the apps icons have been refreshed with EMUI 10 – they are now rounder and more animated. Huawei also changed the UI of the software across the board to introduce a new look. This new look is aesthetically pleasing while increasing functionality. EMUI 10 brings Google’s latest version i.e. Android 10. It also brings over 60% improvements in GPU Turbo, over 70% improvements in Turbo Link, and over 20% in EROFS ROM.

Another major highlight of the EMUI 10 ROM includes the Dark Mode. The new dark mode will also be able to extend to third party apps which are a welcome addition for those who prefer darker menus. This feature reduces strain on your eyes while operating the device in lowlight condition and saves battery.

Before starting the update process, make sure to backup all your important data to a safer place. This will help to restore if any data loss occurs. Also, charge your device well-enough to avoid unnecessary power-off in-between the update process. Refer the below button for a step-by-step guide on how to download and install EMUI 10 on Huawei P30 Pro.

Already upgraded to EMUI 10 on your Huawei P30 Pro? Share your experience in the below comments.